The Secret finally unveiled: Islamists and Jihad in Beni, editing and manipulation …! 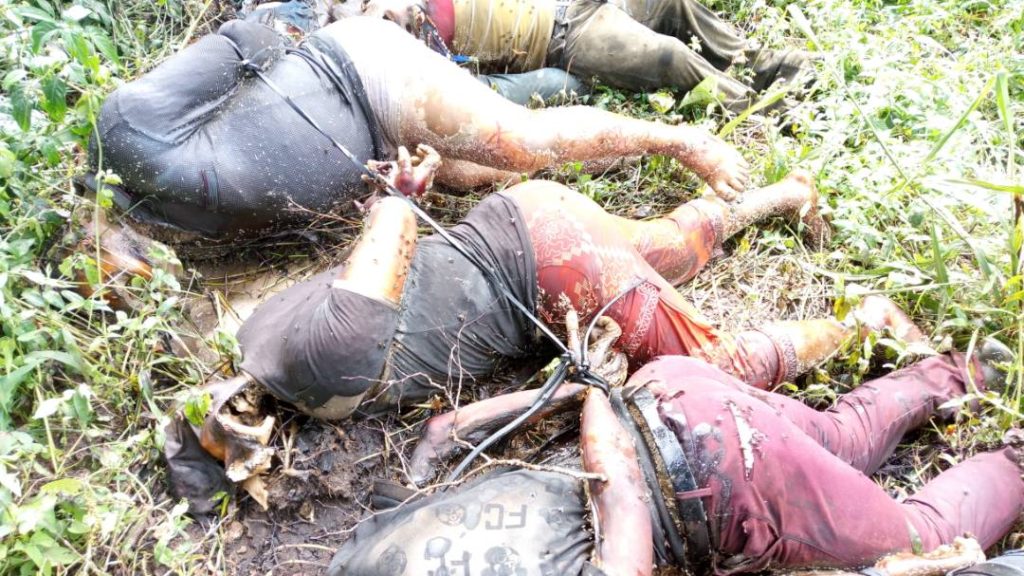 The regime has again slit the innocent to accredit the thesis of the presence of the Islamists in Beni.

The lastest case of the massacres recorded in Kamango – from 07 to 09 October 2017 – is in the cycle of the genocide observed in the region of Beni since 02 October 2014. It has however something particular and again: Strengthen the strategy of power in its Machiavellian plan over the Democratic Republic of the Congo in general, and its eastern part in particular. The cruelty that was used by killers in this circumstance exceeds the limits of a still wicked human order. These corpses still carry the rope of their chain that preceded their torture, these multitudes of motorcycles amassed in a pile and burnt like straw … These moving images underline in themselves the degree of horror that the population of Beni before an astonishing silence of all opinions (national and international) whose word would ipso facto have the effect of stimulating saving actions: MONUSCO, CPI, Human Rights Watch, Amnesty International, etc.

Shame and scandal for the state!

The witnesses, not just the survivors of the Kamango massacres of October 07, 2017, are formal and categorical: their executioners were in military uniforms of the FARDC, which constitute the regiment of troops deployed in this area for the operation Sokola 1. They were heavily armed and presented in all a gait that no doubt was really the FARDC. Other witnesses point out that these executioners began their case by gently stopping the victims and regrouping them, taunting them to warn them of a danger found on the road. Some of these witnesses immediately called and informed their families that they were arrested by the FARDC to protect them from a suspicious movement reported later on. However, the communication stopped abruptly and no sign of life followed, except the news of their death the next day.

Witnesses, not just the survivors of the Kamango massacres of October 07, 2017, are formal and categorical: their executioners were in military uniforms of the FARDC, which constitute the regiment of troops deployed in this area for the operation Sokola 1. They were heavily armed and presented in all a gait that no doubt was really the FARDC. Other witnesses point out that these executioners began their case by gently stopping the victims and regrouping them, taunting them to warn them of a danger found on the road. Some of these witnesses immediately called and informed their families that they were arrested by the FARDC to protect them from a suspicious movement reported later on. However, the communication stopped abruptly and no sign of life followed, except the news of their death the next day.

In a video broadcast on social networks, we learn for the first time a statement presented on behalf of the Jihadists calling for an Islamist war in eastern DRC. More than 20 years ago, Ugandan rebel fighters from the NALU and ADF groups settled in the area. Although they are largely composed by Muslim-based fighters, these rebels have never declared themselves as Islamists throughout the history of their presence in the DRC. Known only as a political rebellion, the NALUs and ADFs had to privilege Muslim culture (religion) because of their nostalgic attachment to the memory of the late ex-president Idi Amin Dada, who had given special importance to the Islamic religion in his lifetime.

The general Bauma destroyed all the sanctuaries of these rebels in 2014. Since then, and especially after the escape and arrest of the leader of this rebellion, Jamil Mukulu, the ADF, as a structured rebellion, no longer exists in the Beni region. The remains of his fighters are transformed into wandering teams that no longer have an offensive capability required to compete with a government army.

What happens in Beni is done against a background of a hidden objective. Kabila decided to maintain a chaos (insecurity and massive killings) in the country to find an alibi for the continuation of his reign as President, on the one hand, and on the other hand, to have time implementation of the balkanisation plan of which it is the agent of race in the DRC. The genocide against the Nande people is justified by the radicalism of the Nande people to oppose this double objective. So the grounds for punishing such a reticence were found primarily in Beni, where the alibi of ADF / NALU rebels provides good coverage of all terrorist acts against indigenous peoples.

– For what interest would the ADF as Ugandan rebels attack Congolese civilians, instead of attacking the Ugandan government they would seek to overthrow? Indeed, it will be remembered that formerly they invaded Congolese villages mainly to remove the people they needed in their service: forced enlistment, transport of booty, sexual pleasures etc. A fortiori they would need these native people today to strengthen their workforce after the 2014 debacle, instead of solely massacring them.

– Why would the Islamists call to the urgency of a holy war in Beni where Muslims represent barely two percent of the local population, especially since this minority has always lived in perfect harmony with all other non-Muslim inhabitants who do not in any way represent a threat against it?

– Other Congolese government flocks who support the lie of power in place over the presence of Islamist terrorists in Beni and Uvira claim that these terrorists arrive through Uganda and via Tanzania. Since when have Uganda and Tanzania been known by international opinion as bastions of Islamic terrorists? In this capacity, Mr. Omar Kavota and the journalist Nicaise Kibel’bel would have transformed themselves into extraterrestrials until they were not informed of the testimony of the victims of Beni themselves and to ignore the independent reports of many organizations, including the Beni-Lubero civil society, the Parliamentary Commission, Human Rights Watch, the UN Group of Experts … These reports unanimously reject any suspicion of the presence of Islamist terrorists in Beni and underline the involvement of the FARDC power) in the responsibility for the ongoing massacres?

Joseph Kabila alone knows better the terrorists and Islamists of Beni, he is trying to create them …

The thesis quoting the Islamist terrorists in Beni is specific to President Kabila and his regime. The Congolese president is relying on this exciting name to persuade the international community of the terrorist danger that would watch the country and the region of the great lakes. But Joseph Kabila’s goal is to push back the new elections, to plunder the country and to collect huge amounts of money to manage a part of the DR Congo, after the Balkanization of the latter.

It was at each advent of the Beni massacres that the Congolese government, through its spokesman, set up a spokesman for Islamic terrorists, claiming in their place and on their behalf the crimes of massacres in progress. This phenomenon was regularly followed until the day when he was gradually stifled by the various reports of investigations of the organizations mentioned above. The Congolese government had finally blackmailed it when the international community and other special opinions pointed out that in no case had Islamist terrorists camouflaged their actions. On the contrary, they always promptly claim them themselves and do not need to have someone else speak in their place. Is it on purpose and to want to contradict these reports that a video has been mounted (seen with the naked eye), showing a bearded man calling on the Islamists to intervene in Beni, in the east of the DRC? The coincidence is not fortuitous.

Benilubero Online has repeatedly reiterated the steps taken by the Congolese president to recruit terrorists whom they would like to use to accredit his Islamist thesis in Beni and, more generally, to plunge the country into the desolation of terrorist chaos. This concern inspired him to send emissaries among others in Libya and Syria. These steps led the Congolese head of state to strengthen the connection with Hezbollah. The latter is a partnership that was to provide terrorists to assign in certain cities and regions of the country targeted in advance by the Kabila regime. Many readers thought at that time that the writing of Benilubero Online was over-zealous. Fortunately, The Sentry, through the exposure of its report of investigations, today confirms, and in its own way, how much the Joseph Kabila regime has supported its power on a partnership with the network of global terrorism. The DRC is therefore headed by a « terrorist » president. The worst reality is that the latter is mounting this terrorism against his own people.

Will the American emissary really allow himself to be pitied and distracted by a terrorist president?

The massacres in Kamango are being carried out as the United States Ambassador to the UN prepares to come to the DRC. Would Joseph Kabila’s regime have organized these massacres to prepare Donald Trump’s country envoy for the now famous thesis that the Congolese government is in the midst of a war against Islamist terrorists and thus push it to weaken the authorities to accept the continuation of the shift of the presidential mandate in the country beyond 31 December 2017?

The friendly countries of the Democratic Republic of the Congo, which are still honest, whether neighbors or far away, should do their utmost to help the Congolese people to put an end to their calvary imposed on them by a man who has no soul or heart, but whose thirst for power goes so far as to dig in him the thirst for the blood of his people.