The tragic and inescapable end of Joseph Kabila! Unlike its neighbors, Kabila misses its longevity to power. 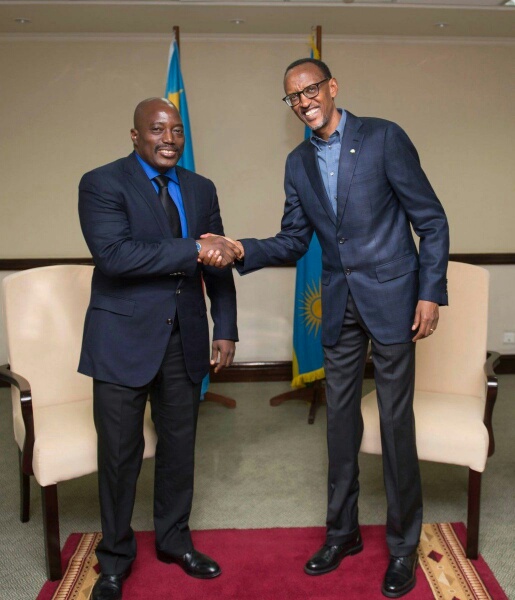 President Kabila, Museveni and Santos in Angola at a meeting of the ICGLR

The date of December 19, 2016 will remain engraved in the memory of all Congolese.  Never has such a date aroused enthusiasm, passions, dreams, caricatures in the Congolese imagination … A date not like the others because it means the end of Kabila regime which demonstrated for 15 years its inability to manage the country for the interest of his daughters and sons. Everyone is now conscious: since its independence, these 15 years represent the darkest moment in the history of the DR Congo. In fifteen years, the country has become the land of corruption and the world capital of rape inflicted on women. In fifteen years, a regime has sprung up rebellions, like mushrooms, over the whole extent of the republic in order to plunder the wealth of his country! In 15 years, the whole country has been destroyed, so much so that no elementary need of a people is guaranteed: water, road, electricity, health care, school, etc. Life expectancy has dropped in 15 years from 57 to 49 years!

The people could no longer hope

So for the people the date of December 19 meant the end of its ordeal and a passage to freedom, even at the cost of its life!

As good pastors, the bishops felt it and wanted to anticipate things. For more than one week, CENCO brought everyone around a table to arrive at a solution before this fateful date. But nothing was concluded and the worst happened.

Without any order from the opposition, to prepare for the event, the people declared December 19 as a day-dead city. This silence has no more to the regime and in certain corners, it has attacked a people without speech by pulling on him, as at Butembo. On December 20, at midnight, 00 minutes, the people as one man stood up and began to celebrate the end of its ordeal, namely the end of the Kabila regime, by whistles, tamtam, drum , pans, plates, etc. This was the case, notably in Oicha, a city where blood has flowed since 2014, and in Kinshasa.

But all this did not concern the consciousness of the regime. A conscience really burned! A few minutes before the end of his term, Kabila had a government published, thus fanning the fire that was brewing …!

In the morning, the people went down to the streets to face the death squads that the regime deployed everywhere. We are talking about 29 dead, just for the two cities of Kinshasa and Lubumbashi. The material damage is also numerous. Several places, symbols of the State, were sacked by the angry population. Service stations burnt down. Buildings and shops belonging to relatives or collaborators of the regime have been ransacked. This is the case in Lubumbashi and Kananga.

Yes, there is no doubt! Kabila is digging his own grave by deciding to extend his mandate by force against the will of the people. The latter is determined to recover the power to him delighted, in accordance with Article 64 of the Constitution.

It's so sad ! He will only attack himself. He will not accuse anyone of not having warned him of the fate that awaits him. Who has not paraded to Kabila to warn him of the danger he is running if he does not respect the will of the people! What great man in the world has not approached him to advise him? Even the Pope! But man has remained equal to himself: a stone!

But the racing signs are there. The signals are red! He has been accused in several reports of all evils. He is presented as the mentor of the genocide of the Yira (Nande). He is accused of systematic pillaging of the country's resources. After the scandal disclosed by the Panama Paper, the American agency Bloomberg rose to the niche just a few days after the end of its mandate and exposed to the national as well as the international opinion how his family did

of the DR Congo its private property and accumulated wealth that nobody could imagine. While everywhere, its partisans, like sirens, make the tour of the world that the country is not able to organize the elections, for lack of money. Another sign not misleading, are the sanctions that fall everywhere against the relatives of Kabila, whether it is the USA or the European Union. How long will he resist?

Kabila missed his longevity in power, it's inevitable!

Fifteen years ago, the country needed a visionary and constructive president. The country was 32 years old from the dictatorship of Mobutu. It was expected from Kabila that the country will restart towards a bright future! The 5 chantiers of modernity so much sung were in reality only works of death. And for that Kabila was strong. Everywhere he passed, he knew how to tell the people the truth by the contrary. That sometimes he promised peace during his visits to North Kivu. And instead of peace, it was war and the massacres that took over. The people are no longer fooled; it will not let itself be coaxed.

Kabila lost his chance! It will not lengthen the list of dinosaurs in the Great Lakes region. He wanted to follow them but he did not follow the secret!

In Uganda, in 15 years, Yoweri Museveni built his country. The country is 70% electrified. From east to west, from north to south, the capital is connected to the rest of the country by a well-asphalted and maintained road network, not to mention agricultural roads. Famine is an almost non-existent word in the vocabulary of the Ugandan people. On the safe side, one can travel at night without falling on the road cutters. On the health front, the people have  access to health care. Teaching is increasingly of good quality.

Foreigners are not afraid to invest. Yes, development is visible. All this serves to shield the regime from the violations of rights of which it can be accused.

Today Angola is the pride of Africa. After more than 15 years of war, the country is the most economically developed and the most stable in Central Africa. Security is not an empty word. And it is not surprising to see European immigrants today in Angola. The longevity of Eduardo Dos Santos in power is partly explained by the economic growth that this country has experienced in the past 20 years.

This country is today recognized as having the cleanest capital of Africa; Where corruption is less than 5% and where the safety, education and health of the population are among the priorities of the regime and are not slogans. In 15 years, the strong man of Kigali is building his country. Investors are not afraid to go. All this makes the international community turn a blind eye to this dictatorial regime where freedom of expression is not a right and its policy of invasion in the DRC.

In DR Congo, Kabila has not been protected by any of these "shields" that its neighbors use. And his tragic end is inescapable, unless he announces hic and nunc his departure and negotiates calmly his future!