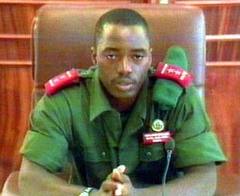 When, in Goma, following public pressure of the inhabitants of North Kivu, MONUSCO tries to help the Congolese government to relocate South Sudanese rebels who were landed there, the Congolese president, as an obstinacy and sabotage, has launched a parallel approach aimed to enhance and visualize thereby the presence of these « undesirable ».

Every passing day reveals a level of obsession with the Congolese president to power. This leads him to ignore any legal requirement that require gestures, behavior, the actions of a man of his rank. This is a struggle for power, with cynical principle of « all means are permitted. » As such, Kabila has resolutely decided to confirm his challenge to both national and international opinions expressed by strengthening his alliance with the rebel from South Sudan, Riek Machar, this marriage against nature, a abomination to security in the great Lakes region.

With that assurance, Machar could only declare with pride on RFI in a report aired on September 25, that he will return to Sudan by war.

All rooted in the Kabila-Machar meeting held in Aru on August 17, 2016. In that day, the alliance was sealed, and the marriage concluded.

Kabila’s urgency to build a « kingdom », a « républiquette » east of the country, specifically in Kivu- Ituri, within the expected expiry of his term on 20 December 2016. He deconstructed the republic army of the DR Congo to create an army of terrorists already in full swing in Beni and Ituri, and soon in the Haut-Uélé. He needs the support of people of the same caliber, that is to say, of terrorist groups and out-of-the-law.
False ADF (the murderers), FDLR and false from Mai to Mai are of course available and already operational on the ground.

However, they are considered collaborators-instruments, to be maintained at the foot of the stairs, step ladders on which he must base his strength. Machar with his organization act as a « partner » that owes its consideration of the availability of its logistics capacity.

Thus, the rebellion of Machar is invited to first support the erection of the autonomous territory that Joseph Kabila dream to make in eastern D. R. Congo. The fulfillment of this dream depends on a chance to reorganize the rebellion of Machar and his hope of returning walking on the power of Salva Kiir. This is why Machar must provide Kabila available men and equipment.

Kabila sends in South Sudan the Congolese Minister of Economy, Mr. Bahati Lukwebo, under cover of an official mission to convey to North Kivu private property and military (logistics of rebellion) of the head of war Riek Machar.

The important weapons and fighters of this rebellion were sent to Haut-Uélé: in the national park of Garamba (Dungu territory), to Kengezi Base (Ingbokolo interritory Aru / Ituri) and to Faradje.

Among the goods that the Minister Bahati Lukwebo should rather channel to North-Kivu for the needs of the war were fifty military truck Land-Cruiser brand. Some of these vehicles belong to the rebellion of Machar, while the other part was acquired with money from the public treasury of the DR Congo to come spray the Congolese of North-Kivu who will impede the project to the installation of Kabila to the autonomous territory in the east of the country.

Considering the current itinerary, the Machar war vehicles and Kabila that Lukwebo shipped were clearly intended for the Beni region, in favor of troops of murderers masked as FARDC under the command of General Fall Sikabwe.

Coming from South Sudan, these vehicles had come to Kampala to meet finally at Mpondwe (Ugandan base border crossing facing that of the Congolese from Kasindi), where a Ugandan official decided to intercept and return them to Kampala.

But Uganda, which has increasingly disapproved of the actions of the Congolese government in how to handle the current political and security crisis, will also be in the collimators of Kinshasa impostors. Indeed, the alliance Kabila Machar feeds a tertiary project against the ruling regime in Kampala, if President Museveni continues to be an obstacle. Which means that after the successful conquest of Kivu-Ituri for Kabila, and the recovery of power in Juba for Machar, the last target will be Kampala.

The former M23 remains a permanent bridge between Kabila and military support that could come from Rwanda. This guarantee is reassuring the Congolese president to persevere in this illusion to sustain in the east of the country, despite everything that can happen to him in Kinshasa.

Sources close to the government claim that Joseph Kabila still has substantial support among Rwandan military officers. It is with this support that he hopes to finalize his cutting ambitions on the east, the illusion of helping Machar to overthrow Salva Kiir in Juba and to change the regime in Kampala.

We trust that this is not the Rwandan official who pulls the string of this demonic project. Indeed, Kigali should finally understand that time is over. What interest would be found to continue to support a regime whose death is already signed both nationally and internationally? It is time that Rwanda adopt a favorable attitude for peace not only in favor of the DRC, but also for the good of the entire sub-region. Because it is the only means by which it can help to heal the wounds created in the heart of the Congolese by its numerous implications in the unstable eastern DRC. The future happiness of Rwanda depends on the effort of cross-border reconciliation to begin today.

Additional advice for Machar: Kabila knows no friends but only interest

The fifteen years of Joseph Kabila to power in Kinshasa sufficiently provided evidence that, more than any other politicians, he is the one whose heart is tightly bounded to the unique personal interest in all his interpersonal relationships. It ignores the implications of friendship. Where it is necessary to have gratitude, he always puts treason.

– ZANGA Mobutu who contributed to his electorate in 2006 is in exile;

– Mbusa Nyamwisi who offered him the East for the reunification of the country in 2003 is in exile;

– The Abbot Malumalu who worked with the greatest dedication to him and to the Nation is buried in the earth;

In what would Machar be special compared to Joseph Kony, the « Joker » of the LRA whom Joseph Kabila called on Congolese territory in 2006, using the same strategies today, when he once needed the criss-cross of his electoral chances? Immediately after the proclamation of his victory at the polls, he abandoned him in the jungle of Garamba, no gesture of recognition, despite his promise to support his military return against the Museveni regime.

Similarly, the FDLR continue to rot indefinitely under the humidity of the Congolese forests, subject to the infernal cycle of a game « to be used and then thrown away; then recovered and used again returned to the trash. «

Jamil MUKULU with his group of ADF has also suffered on his behalf, to end up in prison, after all the delights on which he got drunk with Joseph Kabila in sumptuous apartments of the District of Ma Campagne in Kinshasa …

This list can be extended to the indefinite. In short, the story of this man is a tissue of treason, as can also be confirmed the plot that already nourishes against Ugandan President Yoweri Museveni, who was for him a true « father » in what he is today the head of the DR Congo.

Fooled by the circumstances of the moment, Machar will perhaps not discover this ruse immediately, but he certainly will never make exception.