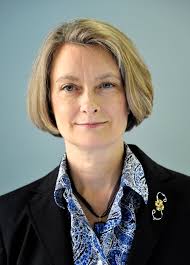 Boston University Alumnus Gunned Down in Congo
Government soldiers reportedly responsible for killing
03.23.2016 By Art Jahnke
Vincent Machozi.
Rev. Vincent Machozi (STH’15), an Assumptionist priest, was gunned down Sunday night in the Democratic Republic of the Congo by a dozen armed men, reportedly members of the country’s army. Photo courtesy of Augustinians of the Assumption North American Province.

Rev. Vincent Machozi (STH’15), a Catholic priest of the religious order Augustinians of the Assumption (Assumptionists), who for several years documented human rights abuses in eastern Democratic Republic of the Congo (DRC), was murdered Sunday night by armed gunmen, shortly after he posted an online article denouncing the involvement of the Congolese and Rwandan presidents in the massacres of innocent civilians.

A native of eastern Congo and a School of Theology student from 2006 to 2012, Machozi worked closely with the BU Pardee School of Global Studies African Studies Center on outreach efforts in the war-torn country.
Beni Lubero, the human rights website started by Machozi while he was a BU graduate student, reports that at 11 p.m. Sunday night, 10 uniformed soldiers of the Armed Forces of the DRC stormed a social center in the North Kivu region, where Nande tribal chiefs were meeting to discuss peace efforts, and demanded to be taken to Machozi and to Mwami Abdu Kalemire III, leader of the Basho community. The gunmen reportedly found Machozi in a courtyard working on his laptop and opened fire. The Catholic website Crux reports that Machozi, whose last words were, “Why are you killing?” died in a hail of bullets. Kalemire escaped unharmed.

African Studies Center director Timothy Longman, a College of Arts & Sciences associate professor of political science and a colleague of Machozi’s, says there had been at least seven earlier attempts on the priest’s life. He says Machozi fled his country in 2003 after receiving several death threats, and working from Boston, set up his website to document atrocities committed by the several warring forces in eastern DRC.

“He was trying to show the world who was killed and who was responsible,” says Longman. “He wasn’t on any particular side.”
Machozi returned to DRC in 2012, putting aside work on his PhD thesis exploring the role of the Catholic Church in transforming the conflict in his country in favor of human rights work. A few days before Machozi was killed, Longman says, the priest posted an article implicating Joseph Kabila, DRC president, in the violence.
Longman says the political situation in that country is complicated, with government forces and various rebel groups fighting one another and terrorizing civilians with widespread slaughter and rape. New York Times columnist Nicholas Kristof has called eastern Congo “the rape capital of the world,” noting that in some areas of the region, as many as three quarters of the women have been raped. Kristoff quotes a former UN forces commander in eastern Congo as saying it is “more dangerous to be a woman than to be a soldier.”

Rev. Vincent Machozi in Bunyuka, Democratic Republic of Congo
Machozi (back row, with hat) with villagers in the mission of Bunyuka, in the North Kivu region of his native Democratic Republic of the Congo.
The International Rescue Committee estimates that since 2008, conflict-related causes have killed more than 5.4 million people in DRC, most from starvation and disease, and the United Nations has described the region’s strife, largely from a scramble for mineral resources, as the deadliest conflict since World War II.
Ayda Zugay (CAS’10), who met Machozi at the African Studies Center and worked with him on his website, says he would be sent pictures of people who had been murdered, taken by people with their phones. “He would get reports from witnesses who would say the military was involved, and he would deliberately post the most disturbing pictures,” she says. “Eventually, he essentially created an army of witnesses. When I met him, I wasn’t really sure if what he was talking about could be true or if it was propaganda. I couldn’t believe something like this could be happening and nobody would do anything about it. Still, nobody is doing anything about it.”
Dana Robert, Truman Collins Professor of World Christianity and History of Mission, was Machozi’s advisor. She says he “was a sweet and gentle person who was liked by everyone. 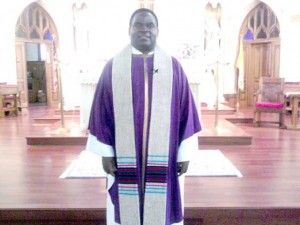 “Every time there has been a genocide, there has been a Catholic priest that reported on it,” says Robert, director of the STH Center for Global Christianity & Mission. “It’s part of their religious calling. One of the big roles is being a witness, and they do that by giving voice to the voiceless. That’s why the loss of Vincent is so horrible. He was a highly educated person who gave a voice to the voiceless. He was like Oscar Romero or Martin Luther King, Jr. (GRS’55, Hon.’59). When you do that, you become a target, and he did that knowing what the danger was.”
On Monday, the day after Machozi was killed, an International Court convicted Congolese politician Jean-Pierre Bemba of war crimes and crimes against humanity. The Boston Globe reports that the court found Bemba culpable for a campaign of rape, murder, and torture in the Central African Republic in 2002 and 2003. According to the paper’s report, Bemba is only the third person to be found guilty in the history of the court, a tribunal that opened in 2002 to deal with large-scale atrocities. The others were Congolese warlords Thomas Lubanga, convicted in 2012, and Germain Katanga, found guilty in 2014, each in connection with atrocities in the Democratic Republic of Congo.
A funeral service for Machozi is planned for today in DRC.
Free Congo! Our request is Justice only Justice.
Is now time for peace in DRC, stop Genocide of Nande(Yira) in East Congo Beni-Lubero specialy in North-Kivu.