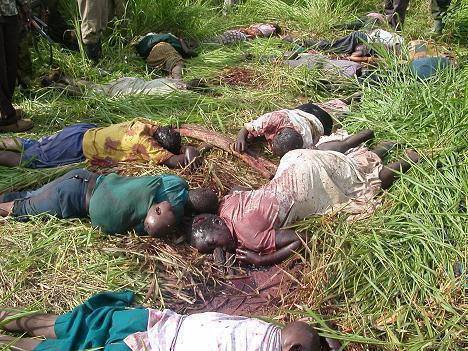 The barbarian killers slaughtered a considerable number of people on Saturday, 07 October 2017, whose exact figure is not yet known on the Kamango – Mbau axis, as a relatively high number of people were dragged into the bush while only a handful of people were executed on the road and their dead bodies abandoned in the open air. These people came from Kamango-Nobili, and some went to Mbau, others to Oicha, others to Beni.
Among these victims whose inanimate body was found include:

All left Kamango-Nobili for Beni and Oicha.
These people were slaughtered by the alleged ADF on the Kamango -Mbau road in the Virunga Park on Saturday 7 October.

Two women survivors of this macabre scene have confirmed that all the people who left Kamango for Mbau-Beni-Oicha were ambushed and slaughtered on this road, except the women (2) who were released as testimony.
Until the morning of this Sunday 8/10/2017 the bodies of the victims were still lying in the park.

According to our sources, mourning is in every family and panic has invaded the entire population in the Watalinga chieftaincy and its surroundings.
This happened after a clash between the FARDC and the ADF who were fighting for control of Madina that the alleged ADF would eventually recover.

Some are surprised that the alleged ADF have once again garnished their former camps in the vicinity of Rwenzori. The ambiguity of such an absurdity is however lifted by the testimony of a female member of these killers who was captured recently after having lost her way. This lady reports that there is a group of people recruited from various origins in Rwanda, Uganda, etc.

It is necessary to repeat by insisting that the assailants who committed the massacres of this Saturday were all dressed in military uniforms of the FARDC of Operation Sokola 1. There is every reason to believe without risk of error that the phenomenon of the slaughterers is indeed back. We emphasize that these killers have the Rwandan morphology and speak in Kinyarwanda and Swahili. No one will distract minds by alleging the present crimes to the traditional ADFs who have lost their offensive capacity with the hunt of 2014. The killers in FARDC uniforms can only be people recruited by the power and endowed with the means of the State to accomplish a mission of which only Joseph Kabila holds the secret.