What will happen when the deputy governor of North Kivu slanders all Nande of Mai-mai? 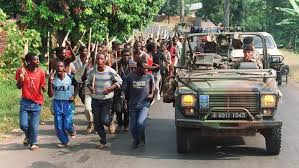 According to the adage that « who wants to drown his dog accuses him of range », the deputy governor of the province of North Kivu held on September 13, 2017 an inflammatory statement that betrayed the plot cleverly mounted for the extermination of the Nande people. Mr. Feller Lutahishirwa, speaking on behalf of the provincial administration of which he is a member of the hierarchy, has thus signified by this act that the Nande population should cease with the illusion of a utopian hope that there would be any relief of the government in its disarray (massacres and recurrent insecurity). This is how Mr Feller is now following in his footsteps to his leaders, in this case Governor Julien Paluku and President Joseph Kabila, who trivialize the Yira genocide by a calumny that reduces the entire Yira-Nande community militia May-May deserving, according to them, to be purely and simply erased.

Where would you have seen a pregnant mother open her own belly to extract her baby to kill herself while shouting « help » for this poor innocent baby? If not, it will remain eternally inconceivable that the Nande people themselves insurrection to exterminate their own community as Joseph Kabila, Julien Paluku and today Feller Lutahishirwa claim, justify the genocide that the regime in place set up to cover an immoral reign.

This is why reactions have been quick to counteract a proportional response to these sadists, who never stop making fun of the innocent blood of which the induced flood is still far from drying up. Among these reactions, interesting is that which was collected from the Nande youth of Kinshasa as follows:

The Coordination of the Nande Youth of Kinshasa requires the Vice-governor of North Kivu, FELLER LUTAHI SHIRWA to withdraw his remarks in which he describes the population of Butembo as « maï-maï ».
Speaking during Radio Okapi’s broadcast on Wednesday 13/09/2017, we quote: « The bandits are Mayi-Mayi at night and the day, they present themselves as civil society, » the Vice Governor Feller mocks desperately in a community, victim of insecurity for years, abandoned in itself and who asks only to be secured by the authorities both civil and military of the country.

Can the deputy governor of the Lutahishirwa explain why for eight months the Kasukuiste bandits have not yet been tried, some of them dressed in police uniforms, captured by the population of Butembo, and handed over to the courts?

The COJEUNAK notes that the provincial and local authorities hide their inability to curb the security crisis by focusing on an innocent population when the following facts are available to everyone:

The armed groups that scour the country are well identified and mostly headed by desert officers from the Armed Forces of the Democratic Republic of Congo. Proof :
the Hutu Nyatura are piloted by the FDLR officers and armed by well-known personalities in Kinshasa;
The Mayi-Mayi, known as the « Body of Christ », whose incursions into the town of Butembo were claimed by a well-identified FARDC officer named Kakolele Bwambale, were greeted by the authorities who not only publicly offered them goats and transported these militias into the jeeps of the National Police;
Other armed groups such as NDUMA DEFENSE OF CONGO (NDC), MAZEMBE … are also headed by militia leaders like Sikuli Lafontaine and others … All FARDC.

In Beni, groups called ADF persist and some of its members are tried while their Chief JAMIL MUKULI struts in Kampala without being worried. No extradition request is made to the Ugandan authorities.
In light of these realities, Nande Youth reminds the Vice Governor of North Kivu that the persistence of insecurity in the region would be maintained for political purposes with a view to asphyxiating a population exposed to a systematic extermination not otherwise justifiable « .

In short, it has become very clear that the tormentors of the Nande people are its own authorities. The repertory of the perpetrators and authors as well as the sponsors of the crimes that mourn the space of Beni-Lubero is enriched every day. They pretend to lead the course of history today, but tomorrow the Congo, once again standing, will crush them mercilessly before the Justice, that they do not ignore it!